NCC (National Cadet Corps) is a national organization which has helped in inculcation in the cadets a spirits of courage, confidence, self-reliance, selfless service, a feeling of patriotism, faith in oneself, power of thought and adjustment which are essential to make the youth disciplined and dutiful.

The formation of the National Cadet Corps (NCC) under the NCC Act, 1948 was a major milestone for the development of the student community. With its motto of “Unity And Discipline”, the NCC has become instrumental in molding the character and imparting in our students a dynamic outlook during their school and college education. In C.A.T.C., the cadets are trained in basic skills of survival and emergencies. They are also taught certain skills pertaining specifically to their Wing for e.g., a Naval cadet is trained in boat-rowing, oaring, Semaphore, etc. Another activity in the camp is the "dogwatch" wherein two cadets are to stay on sentry duty for two hours at any time given time of the day. Those caught sleeping, especially during late night or early morning shifts, or otherwise missing from duty are severely reprimanded or penalized. Cadets are also introduced to weapons such as a .22 caliber rifle.

Advanced leader ship camp is conducted in many places. in this camp the officers give cadets training for ssb screening and entrance. Eight rock climbing camps are held each year to expose the cadets to the basics of elementary rock climbing and to inculcate spirit of adventure amongst cadets. Four of these camps are held at Gwalior in Madhya Pradesh and other four camps at Nayyardam near Trivandrum in Kerala.

They are full of adventure, Cadets who want to experience something adventurous must attend them. Create memories never forgotten. the cadet who wants to participate, have a good stamina for walking. This camp is full of advanture.

NIC is to propagate national integration among cadets and society.'Only the best cadets in drills and march are sent to represent their states.'This camp is considered for SSLC and higher secondary course(+2) grace mark These camps are conducted on All India basis and help bridge the cultural gap among various States of India. In addition, there are six special NICs conducted at Leh, Nagrota (J&K), Chakabama (NER, Nagaland), Srinagar, Lakshadweep and Port Blair.
In this camp cadets are taught leadership quality and stage dairing

These camps are conducted by the NCC in collaboration with Indian Army, as the willing   cadets are attached to the specific regiments under going the training period of 10–15 days. In this camp, the cadets are trained by the instructors of the particular regiment, in the military tactics including day/night warfare & also get familiar with the weaponry. 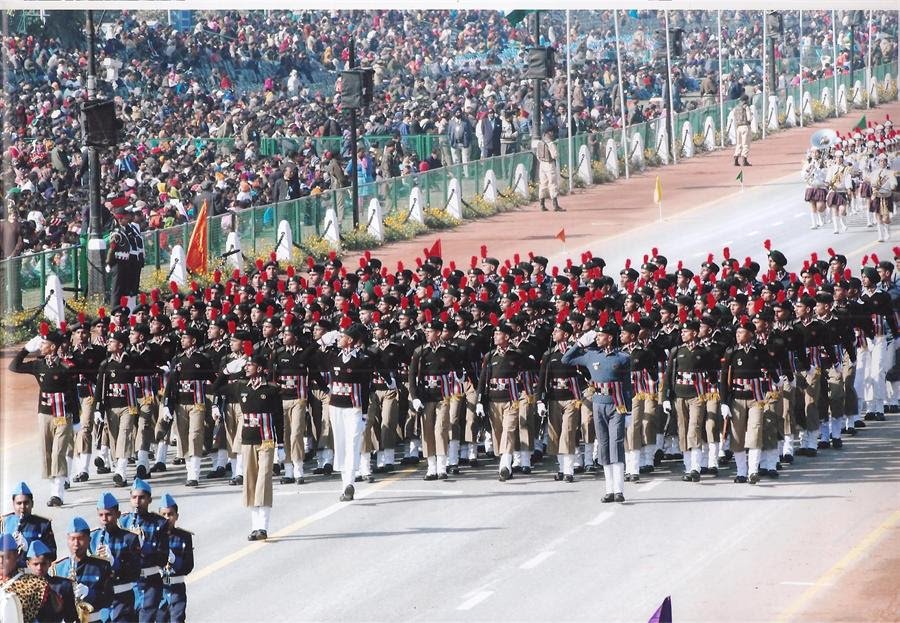 The TSC is a 12 days camp conducted in Delhi every year in the late autumn, in which the cadets are selected from all 17 directorates (30+3 cadets from each directorate), by the selection procedure conducting 3 pre-TSC camps each of 10–12 days in a week interval. The selected cadets then are sent to the TSC to represent their respective directorates in the following competitions:
The directorates also get marks by the inspection of their respective accommodations, dressing and some extracurricular activities by the inspecting squad. Arranging the numbers, the winning directorate gets a cup with decorations from the Director General, NCC on the closing day of the TSC. Two concurrent TSCs are conducted at RD Parade Ground, Delhi Cantt every year. i.e. S D / JD boys and SW / JW girls. 640 Boy and 640 Girls cadets take part in this camps

This centrally organised camp is organised for Air Wing Cadets. Cadets from all directorates attend the camp. VSC is generally conducted in the month of October at Bengaluru.

This centrally organised Naval Camp is conducted annually for selected Naval Wing Cadets. Boat pulling, semaphore, tent pitching, drill competitions are the main attraction of the camp. It is generally held at Naval Maritime Academy (NAMAC) at Visakhapatnam but started to be held at Karwar from 2014. They are full of adventure, Cadets who want to experience something adventurous must attend them. Create memories never forgotten. the cadet who wants to participate, have a good stamina for walking. This camp is full of advanture.

One of the important aspects of National Cadet Corps training is community development, which aims at bringing about an awareness of the social problems and forge them into pragmatic social workers.

The aim of YEP is a country-to-country exchange of cadets belonging to NCC/equivalet Govt/Youth Organisations of friendly countries and participation in various activities and appreciation of each other's socio-economic and cultural realities.

So this was all about the NCC Camps. Don’t hesitate to comment below if you have any questions.