The group headquarters of the National Cadet Corps (NCC) here is making arrangements to celebrate International Yoga Day by mobilising over 12,000 cadets on June 21.

Group Commander Colonel L.C.S. Naidu said here on Saturday that cadets from the Army, Navy and Air Force wings would participate in Yoga Day at 53 venues in East Godavari, West Godavari and Krishna districts and special training was imparted to them following the protocol from the Ministry of Ayush.

Col. Naidu called upon the parents and teachers to encourage the students to participate in the International Yoga Day celebrations and join the NCC as well.

Yoga is a 5,000-year-old physical, mental and spiritual practice Having its origin in India, Which Aims to transform both body and mind. On December 11 in 2014, the United Nations General Assembly declared June 21st as the International Day of Yoga. 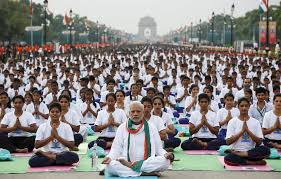 The declaration came after the call for the adoption of June 21st as International Day of Yoga by Hon’ble Indian Prime Minister, Mr. Narendra Modi during his address to UN General Assembly on September 27, 2014 wherein he stated: "Yoga is an invaluable gift of India's ancient tradition . It embodies unity of mind and body; thought and action; restraint and fulfillment; harmony between man and nature; a holistic approach to health and well-being.
It is not about exercise but to discover the sense of oneness with yourself, the world and the nature. " In Suggesting June 21, which is the Summer Solstice, as the International Day of Yoga, Mr. Narendra Modi had said that, "the date is the longest day of the year in the Northern Hemisphere and has special significance in many parts of the world. " 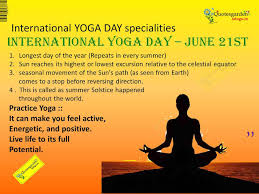 Yogi and mystic, Sadhguru notes the importance of this day in the yogic tradition: “On the day of the summer solstice, Adiyogi [the first yogi] turned south and first set his eyes on the Saptarishis or Seven Sages, who were his first disciples to carry the science of yoga to many parts of the world. It is wonderful that June 21 marks this momentous event in the history of humanity.”

“175 nations, including USA, Canada and China co-sponsored the resolution.” It Had the "highest number of co-sponsors ever for any UNGA Resolution of such nature."